Highlights for the year

In 2019, Friboi grew to fulfill an increase in protein consumption worldwide and in the domestic market. One of the main highlights was the Top Grade Butcher channel, which reached over 1,000 stores during the year. This service is aimed at developing a special sales channel at partner retailers, helping them to manage their meat departments, training professionals and preventing losses. In Rio de Janeiro, for example, Supermercado Guanabara began the year with a pilot project at its Barra da Tijuca store, and by the end of 2019, the program had been implemented in 100% of stores.

Friboi also saw an opportunity for a unique experience with 1953 Friboi by Pão de Açúcar, implemented in 34 retail stores in São Paulo, Rio de Janeiro and Brasília. The initiative features the premium brand, including, in some of them, dry-aged beef. The experience of forming this product mix was a high point for the brand this year.

Partnerships were held with supermarkets as well as with restaurants and the largest restaurant chains in Brazil, guaranteeing Friboi’s place as a market leader. Major partnerships such as those with McDonald’s, Bobs and Burger King were renewed based on performance in service, sustainability, quality and safety, among other factors.

The premium beef segment was another highlight for the year, with sales volume up 46% year-over-year. One factor behind this growth is consumer access to this product, led by 1953 Friboi, which was made easier when the brand became available at retailers with gourmet butchers.

On the foreign market, the Company decided to segment brands by market, with major investments in premium and high value-added products, such as Grill Steakhouse, for Europe, and Friboi Black in China, as well as in segmenting customers by brands and channels, serving niche markets such as food service, B2B, retail and e-commerce. In Dubai and China, the Company segmented brands by customer, a strategy that has had positive results. The 1953 Friboi line grew by 100% in the foreign market in 2019.

In the last year, Friboi has entered the digital world with the launch of an Instagram profile, aimed at bringing its brands even closer to consumers. By December 2019, it already had 10,500 followers, 14 million impressions from posts published on Instagram and 7.5 million interactions (likes and comments).

The Friboi Pecuarista app, available for iOS and Android, is aimed at simplifying the connection between suppliers and the Origination area at Friboi, while also allowing producers to communicate with the Company with the same quality and speed. Prior to the app’s release, all cattle acquisitions were done using two business modalities: spot pricing and cattle futures contracts. Now, livestock producers have a third option, trading via a digital market. 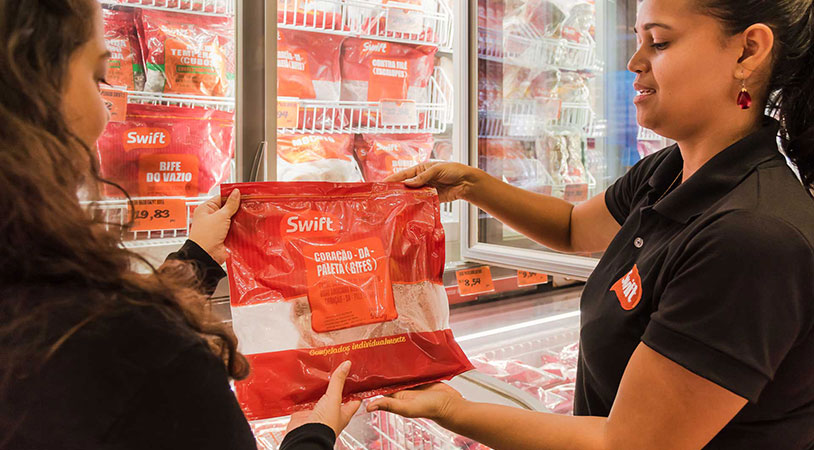 In 2019, Swift created new products and lines, aimed at serving customer demand. In addition, there continues to be a focus on practicality, with the launch of prepared dishes and seasoned meats, reinforcing the brand’s concept of being there at every meal.

Swift reinforced its Gran Reserva premium line of grilling products, with cuts of beef carefully selected from British breeds. Launched in January 2019, it quickly became a success in sales. Another investment is in the sustainable fish line, with guaranteed origin and environmental conservation.

To reinforce a day-to-day presence in the lives of Brazilian families, other innovative products were launched, such as frozen fruit, a frozen mushroom mix and frozen vegetables, and healthy snacks. For 2020, Swift will work to expand, especially by consolidating store-in-a- store service, where the Company partners with major retail chains to assemble personalized spaces managed by Swift. 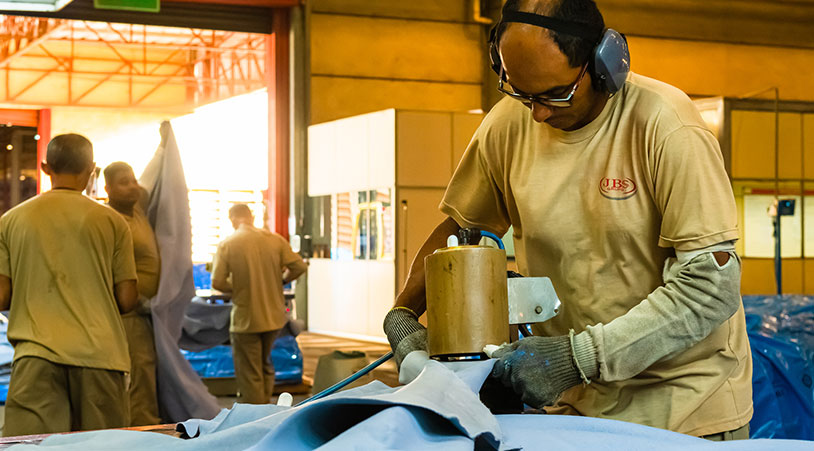 The launch in March 2019 of Kind Leather, a revolutionary type of leather, mostly due to its sustainable attributes, was one of the main highlights of the year for JBS Couros. With a patent filed by the Company, Kind Leather uses a production process that reduces water consumption by 46%, energy consumption by 20%, and CO2 emissions during transport by 65%.

Another high point for the year was expansion of the Company’s Vietnam unit. With an over US$ 5 million investment during the period, the plant practically doubled its built-up area and opened a showroom, a space where customers have the chance to see and handle finished furniture items.

Conceria Priante (www.conceriapriante.com) is focused on the luxury and premium markets, with collections featuring innovative interpretations for leather goods, joining creativity and tradition. Today, it is an international reference in the leather industry, as one of the biggest players in the fashion, leather and furniture segments.

In 2019, JBS Biodiesel saw record production of 265.7 million liters of biodiesel, 2% more than in 2018. Of raw material used in production, 18% (around 47.5 million liters) was from reused cooking oil. This reuse means that around 1.2 trillion liters of water is prevented from being contaminated, enough to meet the daily needs of nearly 30 million people for an entire year, according to the United Nations*.

JBS Biodiesel became the first biodiesel company authorized to take part in a new Brazilian policy to reduce greenhouse gas emissions, with the authorization of the country’s National Agency of Petroleum, Natural Gas and Biofuels (ANP). Through this certification, the Company is now qualified to issue decarbonization credits, called CBios, within the RenovaBio program for the biodiesel it produces, the raw material of which is bovine tallow.

In October 2019, Lins (SP) was the first program-certified efficient biofuel plant, and in February 2020, the Campo Verde (MT) branch was also certified. RenovaBio is a federal government program launched by the Ministry of Mines and Energy, aimed at expanding biofuel production in Brazil to meet the demands of the Paris Agreement. (Learn more in Environmental stewardship)

The Company has also developed new products using recycled plastic products for use by JBS businesses, such as tarps and plastic racks for lining truck beds, plastic pallets for transporting products and oxo-biodegradable shrink film. This last product meets the requirements of SASO standards regulating the supply of plastic packaging to the Saudi Arabian market.

JBS Embalagens Metálicas invested over R$ 80 million to build a new plant, geared exclusively to production of steel (tinplate) and aluminum cans. The operation is set to start in the first half of 2020. Located in the interior of São Paulo, in the city of Guaiçara, the new plant will contribute to creating new job opportunities in the region. With cutting-edge technology and a focus on Industry 4.0, the unit has three production lines dedicated to serving the domestic market.

With the plant’s opening, aerosol production capacity will be increased to over 220 million packages annually. Moreover, the move into the aluminum packaging segment, with a focus on the cosmetics – deodorant market, will be a milestone for the Company. JBS Embalagens Metálicas has also invested R$ 25 million in expanding lithographic printing capacity and modernization of the Lins unit’s production lines. The new, latest generation equipment uses German and Swiss technologies and started operating at the end of 2019.