A commitment to humane and dignified treatment of animals is non-negotiable at JBS (find out more in Commitment to sustainability/Animal welfare). The Company complies with the main global standards to guarantee that its practices are in line with best references, such as the five fundamental freedoms of animals, idealized by the Farm Animal Welfare Council (FAWC).

In Brazil, Friboi uses the Animal Handling Guide, written by Dr. Temple Grandin in partnership with the animal welfare committee at the North American Meat Institute (NAMI), as one of the main technical standards on animal welfare at processing units. Other national and international laws also serve as references, such as European Union Regulation 1099/2009, instructions from Brazil’s Ministry of Agriculture, Livestock and Supply on this topic, and the new Industrial and Health Inspection Regulation for Products of Animal Origin (RIIS-POA), in addition to Contran Resolution 675/2017, which contains provisions on animal transport.

Internally, there is a specific policy for team members who work with animals, in addition to a Company protocol that is part of Supply Chain Protocol certification (see more in Chapter 3 / JBS Brasil / Products and services). Professional Animal Auditor Certification Organization (PACCO) certification is also third-party audited and is another important reference in setting guidelines for animal welfare activitiesl.

Committed to practices to comprehensively comply with animal welfare guidelines, JBS Brasil trained 2,177 people in Brazil on this topic in 2019. Training involved factory teams and Company and third-party drivers. At some units, it was done by BEA Consultoria e Treinamento, while at others it was provided by Soluções Palestras e Treinamentos. The Company uses a liability agreement, where team members attest to their awareness of the Animal Welfare Policy and the guidelines and responsibilities related to animal treatment – as well as the penalties applied in the event they are not fulfilled. Animal welfare guidelines at JBS Brasil for third-party drivers are covered in the respective service provider contract. Drivers are not allowed to handle live animals before learning the Animal Welfare Policy and signing a liability agreement. There is also a platform available to employees that contains videos and other technical materials on good handling practices.

Investments in animal welfare by JBS Brasil during 2019 totaled R$ 74 million and went to initiatives ranging from acquisition of a new cattle transport fleet by JBS Transportadora to certifications, campaigns and training.

With approximately 90,000 registered livestock supplying farms in Brazil, all of Friboi’s supply comes from third-party farms. Of total cattle acquired in Brazil, one-fourth spend 90 to 120 days of their lives on a feedlot, with the rest of their lifetime spent on pastureland, until they reach two and a half to three years of age. The other 75% are wholly raised on pastureland.

JBS encourages the adoption of the best practices at these rural properties. To do this, the Company also holds training, following the Good Management Practices Guidebook, issued by the Ethology and Animal Ecology Studies Group (Grupo Etco) and sponsored by JBS. These guidebooks are the result of work done by the School of Agricultural and Veterinary Sciences at São Paulo State University (FCAV-Unesp), aimed at animal welfare.

Starting in 2016, maximum dissemination of good practices was aimed at reiterating to cattle suppliers the importance of correctly managing animals, preventing suffering and injuries. The project will continue over the coming years and will cover more farms.

Moreover, through a technical and scientific cooperation agreement established with two of the biggest references in the world in this matter, Dr. Temple Grandin and Dr. Mateus Paranhos, JBS also makes constant investments in research and scientific studies related to animal welfare.

The Friboi beef operation is the only one in Brazil equipped with cameras to remotely monitor animal welfare indicators at all production units. Control goes from unloading to slaughter.

A video on this topic is available on YouTube: https://youtu.be/u3v1NEZ5Tok

In 2019, team members were trained by external companies on good handling practices at processing units. To register the results of animal welfare indicators, Friboi has daily and weekly checklists.

During the year, team members were trained in Goiânia (GO) at the local units of Senador Canedo and Mozarlândia, focusing on animal welfare. Training was given by Erika Voogd, an international authority and guest, in partnership with the Certified Humane Brasil Institute.

Some of the training covered the Recommended Animal Handling Guidelines and Audit Guide, written by Dr. Temple Grandin along with the animal welfare committee at the North American Meat Institute – NAMI. While the practical module consisted of a simulated audit focused on handling, from loading to slaughter of animals, as well as document verification, including traceability aspects. 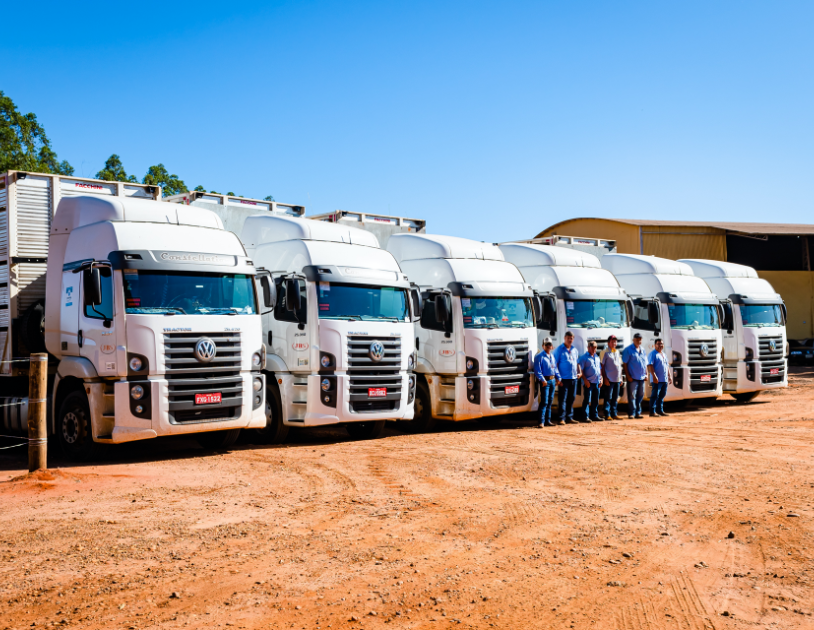 On average, JBS supplier farms are located 167 km away from the Company’s production units. To guarantee quality in transportation, drivers are trained annually by JBS and by a third-party company (SBC).

As a routine procedure, 100% of JBS cattle transport vehicles are audited using a specific form and drivers are given periodic guidance on the importance of good maintenance on cattle transport pens.

JBS Brasil invests in modern fleets, designed with the goal of lessening the risk of animal injuries and falls, in addition to optimizing transport. This includes investments in research, aimed at continual improvements to the 2-floor trailer model, launched in 2016, geared toward promoting animal welfare during cattle transport. The fleet of around 250 trailers, operated by JBS Transportadora, has tip-less partitions, a no-slip floor and a hydraulic elevator that makes animal loading and unloading quieter, less agitated and, consequently, less stressful for animals and for the driver.

Over the year, the main actions related to this topic that deserve mention were: 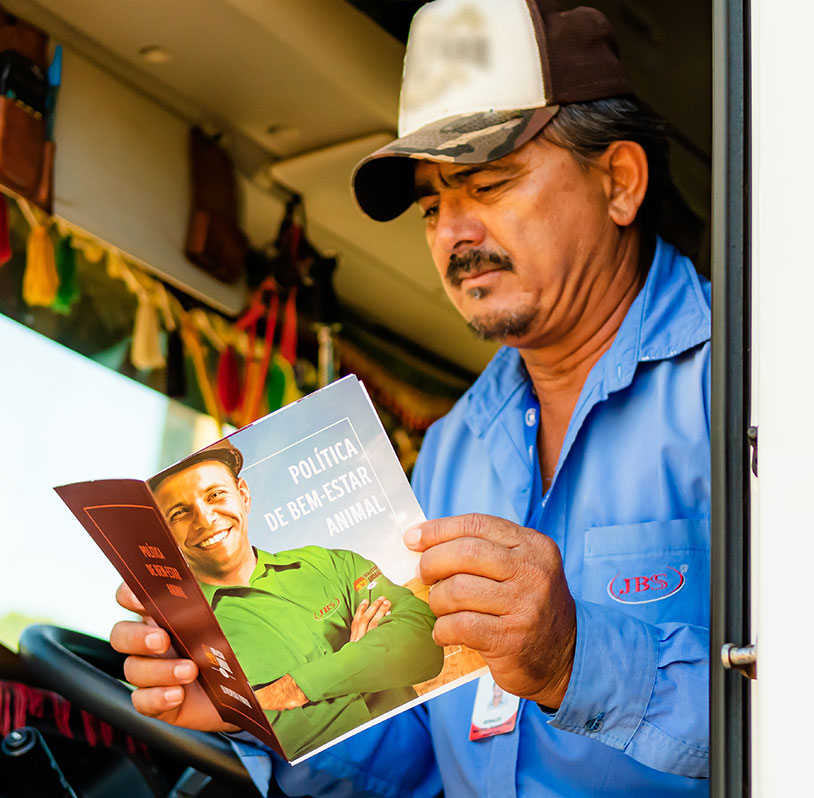 The topic of animal welfare is now one of the topics that can be handled by the JBS Ethics Hotline. This leading role reiterates the Company’s interest in holding dialogs with stakeholders on this topic and any opportunities for improvement connected to it.

In 2019, JBS worked to approve and launch a new unified visual identity for animal welfare, which includes the JBS animal welfare Seal. This initiative functions as a way to provide visibility and raise awareness among all team members of the value this theme holds for the business.